Malaysian graduate Andrew Loh is passionate about politics — so much so that he studied it for his bachelor’s and master’s, took on government consulting roles locally and abroad, and even organised nationwide community projects that have played a role in shaping his country’s future.

And he’s hungry to achieve more. The 35-year-old recently graduated from not one, but two top universities in the world — Harvard University and Stanford University — after successfully enrolling in a dual degree programme.

We caught up with him to find out more about his experience with studying at two of the world’s top universities, along with his future aspirations: 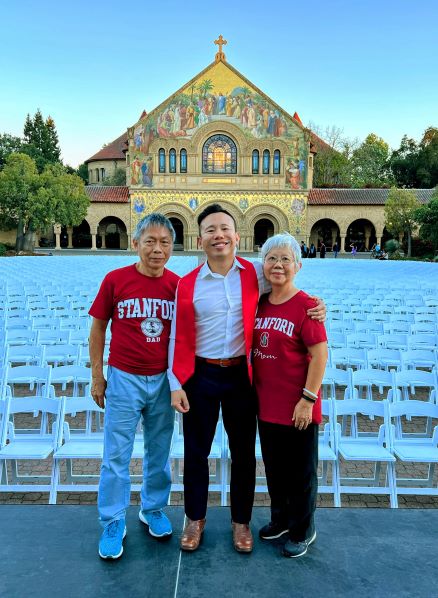 Loh (centre) with his parents during his graduation ceremony at Stanford University. Source: Andrew Loh

1. Congratulations on graduating from Harvard! Why did you choose to pursue a dual degree programme at Harvard Kennedy School and Stanford Business School?

When I worked as a consultant in Malaysia, Tanzania and other countries, I was struck by the state’s importance in creating change. I was interested in understanding the different levers — the state, private sector and non-profits — to see how I can create change as an individual and a future leader.

That’s why I chose Harvard and Stanford. I wanted to sharpen my understanding of how the state can use these levers to create change at Harvard and understand the levers of the private sector at Stanford.

2. How did you apply for the dual degree programme?

I applied for both degrees — the Master of Public Administration at Harvard and the MBA at Stanford — separately.

When I got accepted to both, I spoke to the universities to sequence my dual degrees so that I only needed three years to study at both universities. You can choose whichever university you’d like to start with — for example, I spent my first year at one university, the second year at another and another six months at each university.

3. What was it like for a Master of Public Administration at Harvard Kennedy School?

Here, I continued my love for both my country and civic action. During the COVID-19 pandemic, I used lessons from my HKS classes to co-found an online platform that empowered ordinary Malaysians to channel aid to vulnerable communities via non-governmental organisations (NGOs). We reached more than 300,000 users and became Malaysia’s default hashtag for COVID-19 civic initiatives. I learnt that action is contagious — it begets action from others. In fact, our movement inspired the replication of similar platforms in Germany, Austria, and India.

At HKS, there was also this lecturer, Pinar Dogan, who teaches economics. She was amazing — she treated us as students and friends. When COVID-19 hit, we had no idea what to do so she arranged a get-together and organised a trivia competition about her students via Zoom. We could tell she had spent hours Googling trivia about us just to build a community during that time of uncertainty. She touched us in ways that were so relevant and apt to us individually — we ended up nominating her for a teaching prize.

It was great. I loved it. I prioritised what I wanted from my experience — like I wanted to come out of it with lasting friendships and communities, so I did that and loved it — just making friends and being wildly inspired by why people chose the school and what they wanted to do in life. 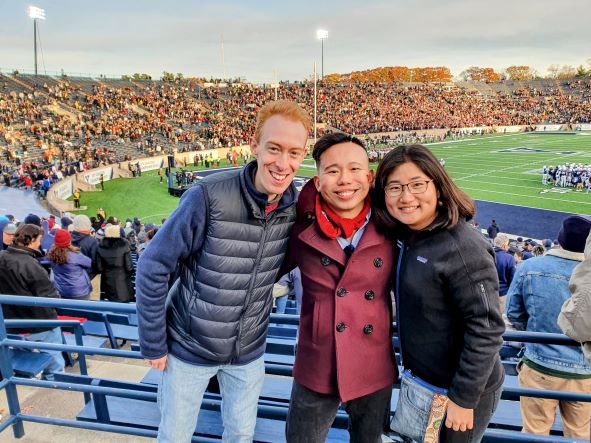 Loh (centre) with his friends at a Harvard-Yale game. Source: Andrew Loh

I love, love, love Stanford — I love the school. It is beauty and magic.

At Stanford, my class is very, very small. It differentiates itself from other business schools by the type of community it builds. I get to know everyone’s life stories in class — Why are you here? What are you doing? What do you want to do in the future?

And because we’re so small, we could do all these things. As a result, we basically knew everyone, and I came out very happy that I got to know people. Whereas, with the more extensive business programmes, it may not be possible to have this kind of minor subset experience. This is why I love Stanford.

5. What were the most memorable classes throughout your dual degree programme? Why?

Stanford’s classes are superb. There’s this class called Touchy Feely (formally known as Interpersonal Dynamics) — it’s probably the most famous Stanford Business School class in history. The alumni have ranked the subject number one. The class talks about your feelings, how you impact people and getting that kind of feedback in person.

Another amazing class is the Managing Growing Enterprises (MGE) class. In this class, you assume the CEO role of a company and have to fire someone or lay off people. It’s a specific business dilemma; there’s no hard or easy solution, so what do you do in that situation? How do you interview people? How do you hire a second in command in between like three great candidates? The class puts you in these specific business situations, and you have to roleplay them. It’s amazing. I have a whole bunch of notes in my notebook that I will keep forever.

Lastly, there’s this class, Humour: Serious Business. This class has challenged me to use humour as a tool to gain influence and to have an impact on my professional life as well. By having humour, authenticity and showing my true self at work, I’m giving the licence for others to do the same. We don’t have to always walk on eggshells with each other. This specific class gave me insights into how I should conduct myself as a leader in the future.

6. Tell us how your journey as an international student began.

I knew I wanted to study in the States because I could apply undecided, and I wouldn’t have to determine what I wanted to major in until the second year of college.

If I had chosen to study in Malaysia or the UK, I would have to choose a specific major — for example, pursuing Philosophy, Politics and Economics at Oxford University or Law at Cambridge University.

So the US’ flexibility appealed to me. I didn’t know what I wanted to do in life — and the only way of really knowing was to experience it for myself and take some classes.

7. Why did you decide to study the Bachelor of Arts, Political Science; Islamic Studies at Swarthmore College? What was it like studying there?

Politics was what interested me at Swarthmore College — a small liberal arts school in Philadelphia.  After taking a few classes, I was like, “Oh, this is actually really cool and interesting”. So, not only did I major in Political Science, but I also minored in Islamic Studies. Studying Islam and Arabics was interesting.

Swarthmore was great — not just for its academics. The thing about American colleges is that they have a very comprehensive approach to tertiary education.

I had many opportunities I could exploit in Swarthmore that I wouldn’t have been able to do in Malaysia. What really enriched me was the friendships I made — we did things like having late-night conversations with new people at new dorms.

I was also in many different extracurricular activities — I was in the debate team, choir, and an Arab musical ensemble where I performed with an Arabic superstar. 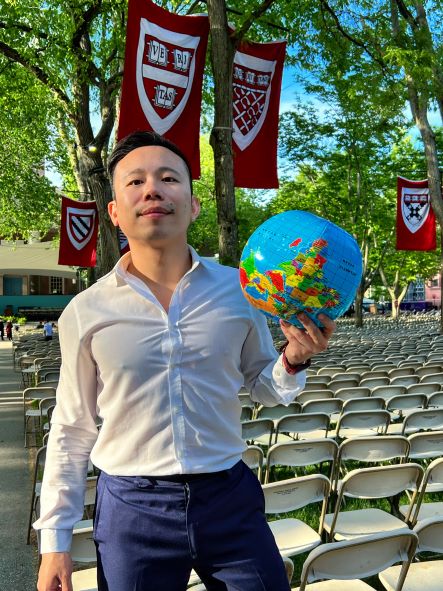 “In the long run, I hope to return to Malaysia to serve in a leadership role (eg: Election Commission Chairman; Prime Minister) — where I hope to apply all my learnings to turn my citizens’ helplessness into motivation; inaction into action; action into change.” Source: Andrew Loh

8. How has the education at Swarthmore College made you who you are today?

I learned to manage time — it’s the most precious resource you can do as a student.

So you know that joke, right? If you’re a student, you have to choose three things to do — you can choose to study, make friends, take part in extracurricular activities or sleep, etc.

For me, I focused on sleeping, doing well in school and being present enough to enjoy time with friends — rather than being involved in 110 different activities.

This practice carried on in life as well. After college, I worked to advise governments across Europe and Asia — most recently with the Tony Blair Institute. And you get to see that the most important thing leaders — whether it’s prime ministers or presidents — do is manage their time.

Your time is limited to 24 hours per day — you can spend it on 100 different things but may not deliver or choose to prioritise two or three really important deliverables and outcomes.

9. You’ve worked in numerous countries throughout your career. What was it like living in different countries?

I’ve always had this wanderlust. I wanted to see the world — and having a career in this field that allowed this was perfect.

I was lucky to have the opportunity to work in different countries — I got the chance to see the world and connect with other cultures, people, languages and communities.

My job was not only good (in terms of remuneration), but the work was impactful and meaningful. For example, when I was working with the Tony Blair Institute in Sierra Leone post-Ebola, we helped the government implement a recovery programme — which was amazing.

10. Can you tell us about the cultural similarities/differences between these countries? For instance, was there anything that came as a culture shock to you?

Regarding culture shock, I think coming from Malaysia — a multiracial country — helped. I was exposed to many cultures back home, and this openness and embrace made me more adaptable than others.

I love learning about different cultures and the little idiosyncrasies that they have. I love that whenever I’m in a specific country, I get to learn the language because I think it’s really good and that it shows respect.

I also do it because I love learning languages and that it’s good for the consequences. People feel differently when they see that you care about their culture and language. They’re like, “Oh, this person is interested in us and our culture”, and this helps them open up.

11. What are your plans now that you’ve completed both of your master’s? Do you plan to continue staying in the US?

I’m not sure. What school has taught me is that you don’t need to rush — just take your time and reflect. But yes, I’ll continue staying in the US for now.

In the long run, I hope to return to Malaysia to serve in a leadership role (eg: election commission chairman; prime minister) — where I hope to apply all my learnings to turn my citizens’ helplessness into motivation; inaction into action; action into change. I’m not sure if I’m the right person to fix it — but there are things in Malaysia, like the democracy and education, that really need fixing.

Categories: Global
Tags: did, global, how, malaysian, this