Ask any international student what they love about studying in Toronto, and they might just say the city’s rich cultural diversity and top universities, such as the University of Toronto, as pull factors. This was echoed by Aishwarya Nair, although these weren’t the sole reason she gravitated to the capital of Ontario.

“I always wanted to explore and learn more. That was always in the back of my mind. Canada specifically piqued my interest because it was sort of an up-and-coming in the education field at the time, a lot of people were talking about how it is immigrant-friendly,” Nair tells Study International.

Nair was no stranger to international environments. Growing up, her family moved a lot which allowed her to experience living amongst people of different backgrounds in Nigeria, India, and South Africa. 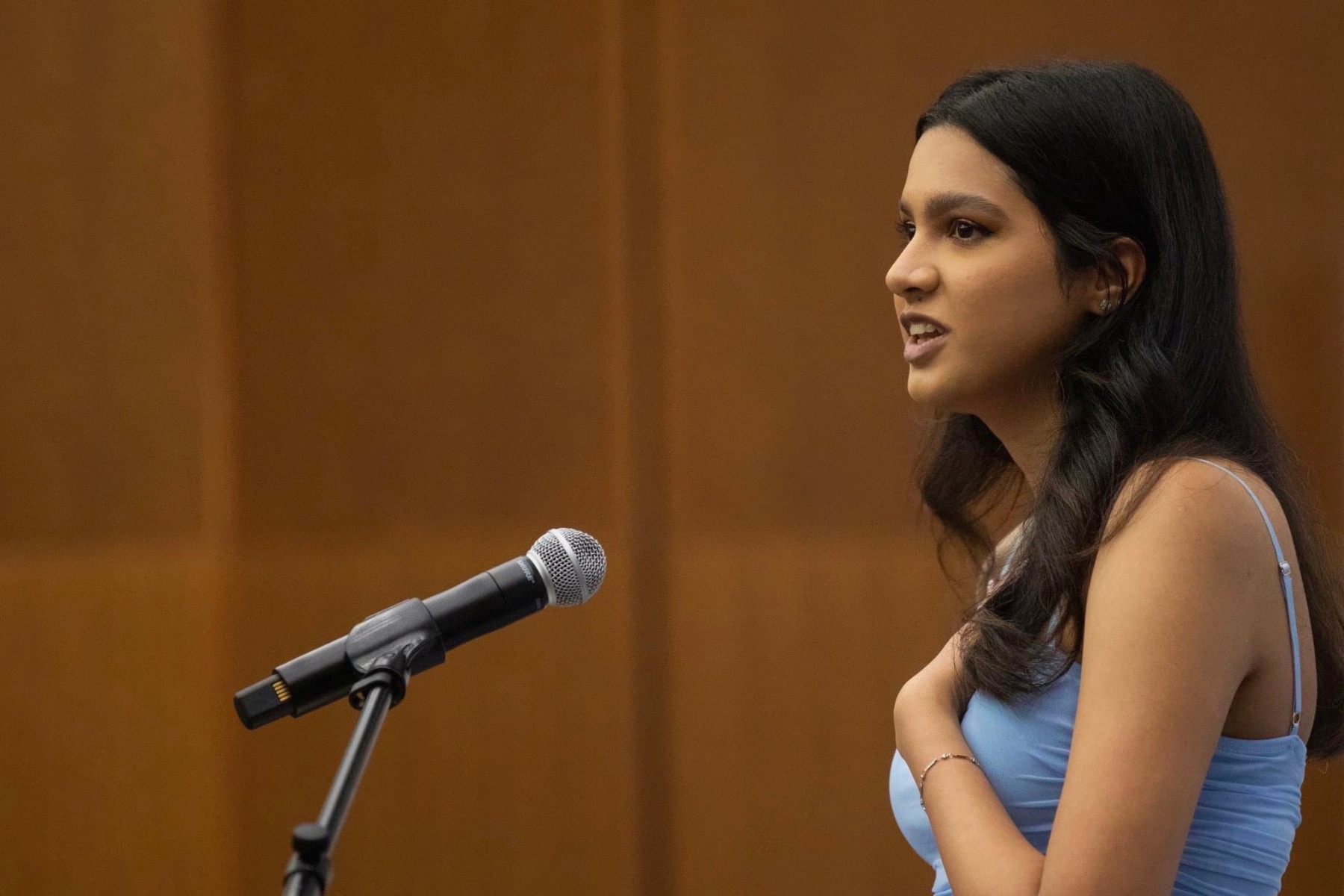 Aishwarya Nair promised that she will use her “gift of education” to the fullest in her graduation speech. Source: Nick Iwanyshyn

Life as an international student at the University of Toronto

Although she faces her own set of challenges as an international student in Toronto, the culture shock wasn’t as much of a setback for her as it may be for others in the same boat. What she found refreshing about the city was the freedom to be herself.

“The city is so diverse that everyone’s just being themselves, which makes you feel more comfortable to do the same. You feel less of that pressure when you realise that everyone comes from such different backgrounds,” she shares. “We engage with people from all walks of life, introducing ourselves to diversity in thought, creation and expression. Some of my closest friends come from countries I’ve never even visited.”

Nair, who hails from India, came to study neuroscience (and a double minor in biology and philosophy) at the University of Toronto in 2018. This dream of hers sprouted in the ninth grade when she read a book called “The Man Who Mistook His Wife for a Hat” by neurologist Oliver Sacks. The book details several unique patients Sacks worked with, written in a way that was easy to read. “I remember reading that book and thinking, the brain is such a fascinating organ. We have no idea how strong — or fragile — it is. There’s still so much research to do. And I remember wanting to be a part of that in some way,” she explains.

Whether that was research or therapy sessions, Nair knew she wanted to be involved. That was when she decided to put two and two together and began applying to universities in Canada that offer robust neuroscience programmes — one of which was the University of Toronto. At the time, being admitted wasn’t her only concern. Like many other international students, funding was an issue. Luckily, she found out about the Lester B. Pearson International Scholarship, a full-ride scholarship that covers tuition, books, incidental fees, and full residence support for all four years of undergraduate study at the University of Toronto. 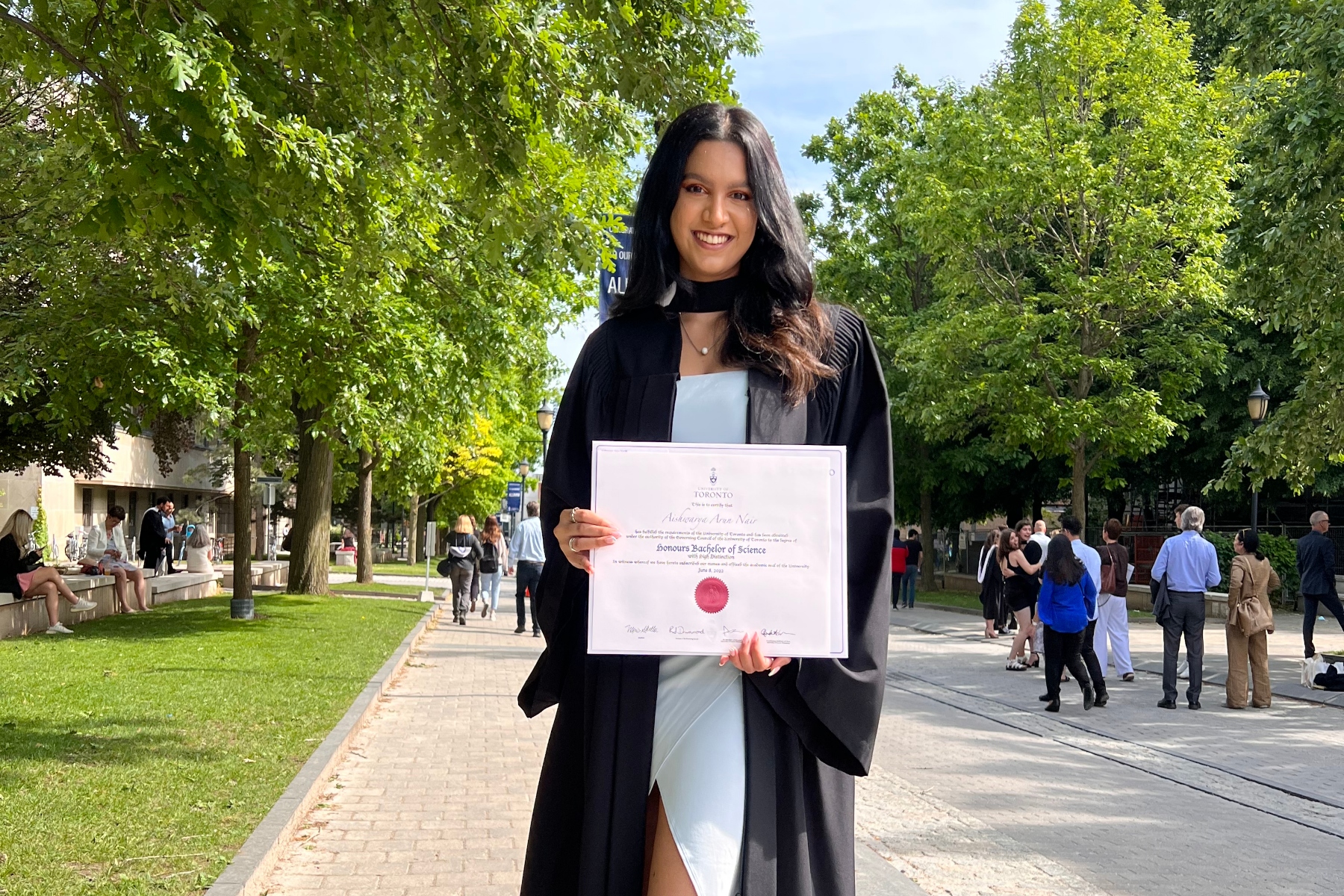 The Class of 2022 valedictorian is now ready to make the University of Toronto proud. Source: Aishwarya Nair

Fast forward to this year, Nair is the University of Toronto Mississauga (UTM) Class of 2022 valedictorian. In her graduation speech, she mentions how grateful she is to receive the gift of education. “You might wonder why I use that word: gift. As much as education is a right, we live in a world where it is often a privilege,” the 22-year-old explains. “Inequitable distribution of resources and barriers to entry prevent so many brilliant minds from realising their full potential. Thus, as graduates of UTM, we walk away with the gift that many dream of receiving.”

However difficult the ride was for the past four years, she never imagined that she would be chosen as valedictorian. She spent her second year onwards adjusting to the academic rigour UTM was known for whilst working 10 to 12 hours per week as a Resident Services Assistant. Somewhere along the way, she juggled a Student Research Opportunity Programme simultaneously.

“It was definitely a bit of a balancing act, figuring all of that out. But I think I got better when I got into the third year and moved into my fourth year where I figured out how to find time for myself amongst all of that – because it is important to look after yourself,” she says. Working hard is important, but the beauty about not knowing how the valedictorian selection process goes is that prospective students won’t focus their entire journey on getting the award.

This is especially true for Nair, who hopes to do well on her Medical College Admission Test (MCAT). It is a long haul to become a neurologist — you generally need an undergraduate degree, take the MCAT, move on to medical school, and spend a few years completing your residency. “When you do this, you have to really want it,” Nair muses.

But it wasn’t all work and no play for Nair. She has an artistic side to her — she would paint and sing her heart out with her friends to destress. She is also a huge foodie. “In my free time, I make videos of the places I explored and the food I ate for my social media,” she shares. “I’m also very extroverted. I always want to learn about who people are, where they come from, and what’s their story.  We’re sometimes in our little bubble, and when you study abroad, you learn how big the world really is.”

To her, there is no better place for an aspiring neurologist than Toronto. “There are a lot of hospitals, research institutions, and everything’s basically in the heart of the city. You feel like you can do anything once you’re here because you’re walking past all these places on a daily basis.”

Asked whether she had any advice for would-be scholars and students of UTM, she laughs as she recalls how she scrambled to get her applications in before the deadlines, “I think my biggest advice would be getting involved as early as possible.”