If you’re an international student spending your summer in the UK or are set to graduate in the next few days, be warned: the government has issued a national emergency after record-breaking heat warnings were announced.

The UK heatwave is reaching extreme levels. The Met Office on Sunday announced a red extreme heat warning for the first time as temperatures are predicted to hit over 40 degrees Celsius. Similarly, the UK Health and Security Agency issued its highest level four heat alert, cautioning health officials and individuals that illness and death could occur “among the fit and healthy”.

Here are the top temperatures recorded across the UK on Monday 👇#heatwave2022 #heatwave pic.twitter.com/irazHtAI15

On Monday, temperatures crossed into 38 degrees Celsius in Suffolk. This is a cause of major concern for the country, with many establishments, buildings and public spaces unprepared to deal with scorching heat. The BBC has reported a wildfire in Birmingham on top of this, which broke out over Monday afternoon.

Netizens have been taking to Twitter to document the effects of the heatwave through the #UKHeatwave and #TomorrowGoingToBeSoHotThat hashtags.

#TomorrowGoingToBeSoHotThat I’m taking the shower to work with me… pic.twitter.com/tW0liKtm5G

Particular emphasis has been placed on pets and wildlife, who are collapsing due to the UK heatwave.

Swift’s are falling out of the air because of the #UKHeatwave please follow instructions on this thread ! Thank you 💚🙏 https://t.co/7i6ngXiqwW

#TomorrowGoingToBeSoHotThat your dog’s paws will MELT from hot pavements. Pavements can be over 10° hotter than air temperature. If you’re worried it’s too hot for them: place your open palm on the pavement for 10 seconds. If it’s hot for you it’s too hot for them. Stay cool! 💙 pic.twitter.com/OexGRXks8s

Universities prepare for effects of UK heatwave at graduation ceremonies

The UK heatwave has caused many schools to close their doors as the government advises citizens to stay indoors and seek out air-conditioned areas. Most universities, fortunately, are no longer holding classes — but concern is rising among students and guests attending graduation ceremonies taking place over the next few days.

This year marks a significant year for graduating university students. As a result of the pandemic, graduation ceremonies over 2020 and 2021 have largely been cancelled — giving this year’s graduating cohort more cause for celebration than ever.

Three graduation ceremonies on record setting day for a heatwave… nailed it ✅
I work with a lot of wonderful colleagues and a doff of the cap to them for making today such a safe and memorable experience for all our graduates and their guests. Let’s do it again tomorrow! 👨‍🎓 pic.twitter.com/yv80vJt8jN

Universities — and indeed, students — are determined not to allow the UK heatwave to disrupt such ceremonies. However, many institutions have advised students, parents and guests to take extra precautions against the extreme heat.

“The graduation ceremonies will carry on as planned, although we have taken a number of measures to reduce the heat risks including additional air conditioning units and extra drinking water,” the Student News Team at the University of Manchester said in an update. “We may need to make further adjustments on the day, and we will keep you up to date as the day progresses.”

To prepare for the hot weather, Manchester has also advised students and their guests to dress in light, loose fabrics. This is especially crucial for graduating students who will be donning heavy black robes as a requirement for their ceremonies.

Hi Maria, if you are concerned about graduation ceremonies during the heatwave, please rest assured the Great Hall and other areas are air conditioned. Extra water coolers have been provided and first aiders will be on hand.

Manchester has advised students to keep out of the direct sun between 11 a.m. and 3 p.m.; apply sunscreen; bring a wide-brimmed hat, umbrella and/or handheld fan; and carry a water bottle to stay hydrated throughout the day.

“If travel delays result in graduates arriving late or missing their ceremonies, they should inform a member of staff who will try to get them into the next available ceremony,” the university added.

The University of Reading has similarly made a number of preparations for ceremonies taking place over the next few days. Outside of relaxing its dress code so that students can dress comfortably, Reading has increased first-aid provision; the availability of comfortable indoor seating space; additional water and sunscreen stations; fans in busy indoor spaces; and free ice lollies.

“The high temperatures may pose greater risks for those with significant relevant pre-existing health conditions. If this applies to you or a member of your party, you may wish to take advice from your medical practitioner,” said the university. 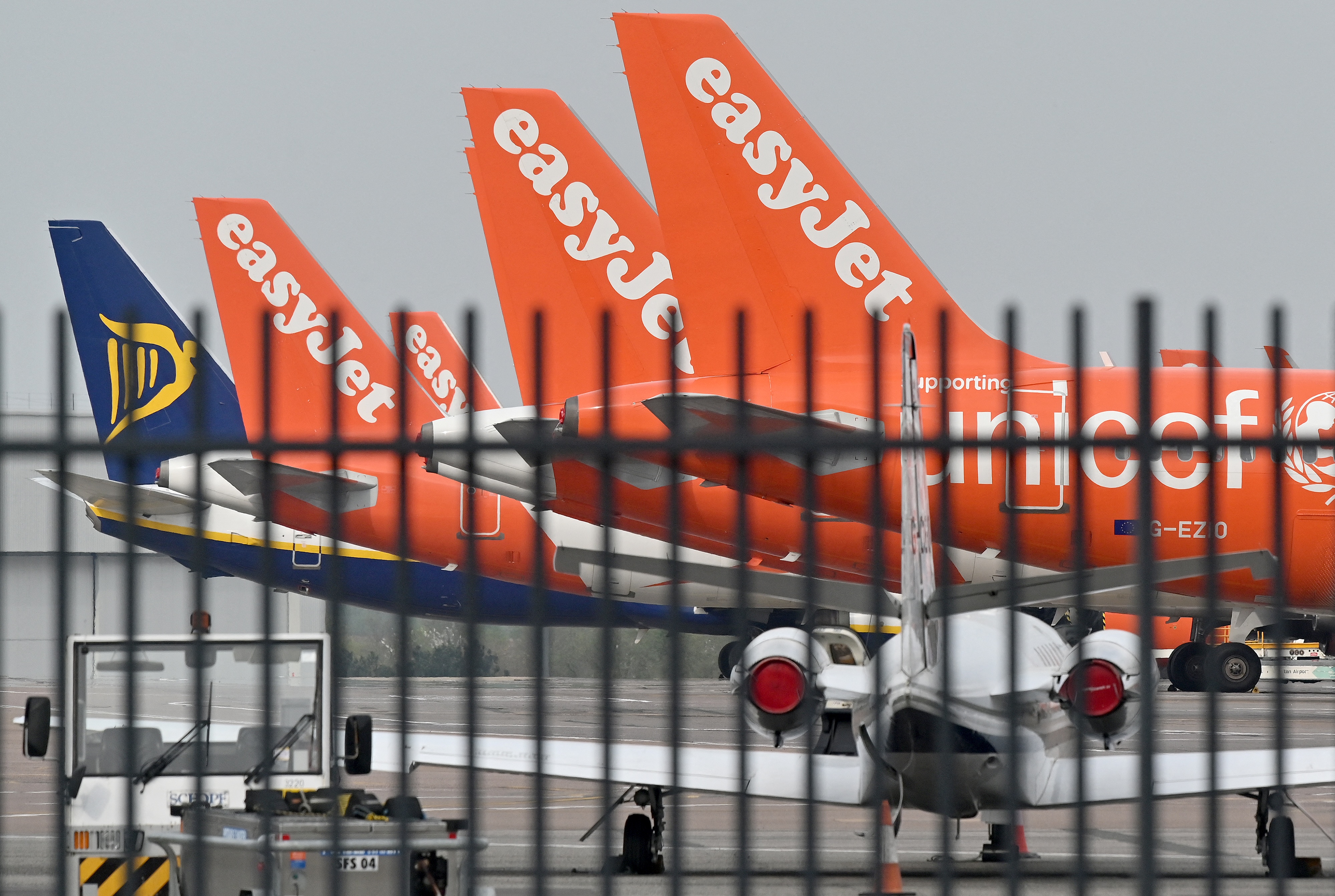 Inbound and outbound flights at Luton Airport were disrupted after a “defect” was found on the runway. Source: Justin Tallis/AFP

National travel and international flights could be disrupted

The UK heatwave has also disrupted travel. On Monday, Luton airport was forced to suspend flights after a “defect” was found on the runway.

Luton is the fifth busiest airport and acts as the base for Easyjet, a popular budget airline. Engineers were quickly called to the scene and outbound flights were resumed by 6 p.m. local time, with inbound flights quickly following.

Trains are being disrupted as well, with cancellations and delays accumulating over Monday. According to the Guardian, speed limits were brought into force as temperatures rose in the afternoon.

Morning and night-time services appear not to be affected. However, passengers are being told that they “should not be lulled into a false sense of security” by services running properly and that “breakdowns are inevitable”. 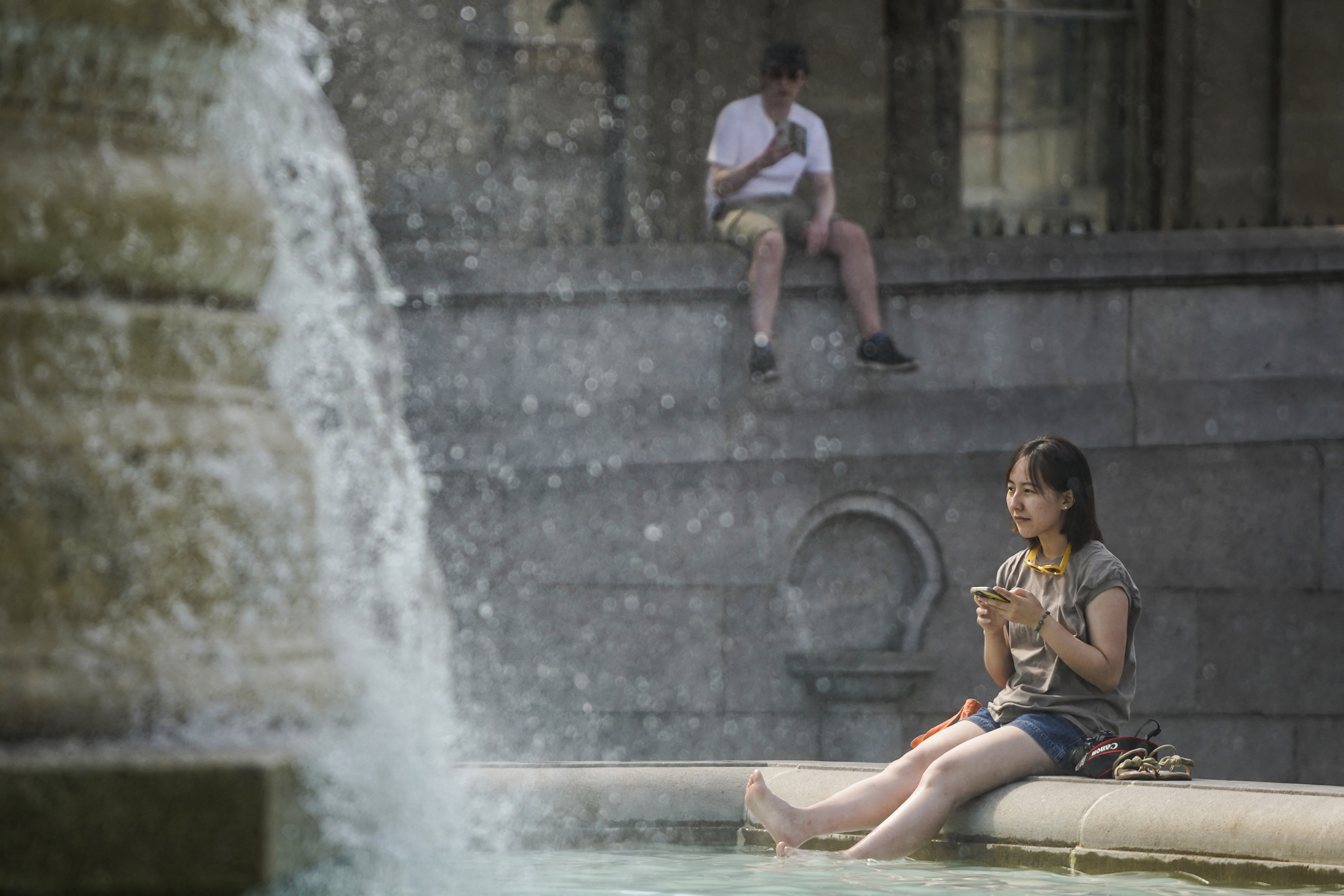 People were seen dipping their feet in the fountain at Trafalgar Square to cool off. Source: Niklas Halle’n/AFP

While this marks the first year temperatures have ventured above 38 degrees Celsius, climate advisors have been issuing warnings for years.

“We’ve been telling the government for over 10 years that we are nothing like well enough prepared in the UK for the really hot weather we are seeing now,” Climate Change Committee (CCC) chair Lady Brown told the Guardian.

“Over the last few years, hundreds of thousands of new homes have been built that are not resilient to future high temperatures,” CCC member and professor at University College London, Professor Mike Davies, told the Guardian. “These will now require costly retrofits to make them safe, habitable and water efficient in the future.”