Here’s some welcome news for students in India who are planning to apply for a US visa in the summer of 2022: changes in the US student visa application process by the US embassy in India could see more visas for Indians.

Donald L. Heflin, the Minister-Counselor for Consular Affairs at the US Embassy in Delhi, was quoted saying by the Times of India: ”Last year we interviewed more students and issued more student visas in India than ever before.

“This year we hope the number of student visas will be even higher than the 62,000 issued last year. However, that will also depend on how well prepared the student visa applicants are.”

Last summer, it was announced that international students could physically return to US campuses after many were shuttered during the pandemic.

Following this, the US Embassy and consulates in India announced the opening of tens of thousands of interview slots to attract applicants from India to apply to various courses and higher education institutions in the US for the Fall 2021 session.

Indian students enrich our universities, contribute to American economy, & build lifelong bonds w/ Americans. No. of Indian students studying in U.S. has increased 5 yrs in a row, more than doubling from 96k students in 2012-13 academic year to more than 200k in 2018-19. #IEW2020 pic.twitter.com/NeA6GsoHUK

While students had been advised to visit the US Embassy website to schedule their visa appointments, there were two major problems that caused obstacles with the issuance of student visas for Indians.

Firstly, the worldwide computer database handling international student visas crashed as a result of an overwhelming number of student visa applications from India.

”While in the first part of the season we had good and genuine students applying for visas; in the later part last summer, many applicants who we interviewed were coming to us a second or third time having been refused student visas earlier.

“That was taking slots away from good students,” said Heflin.

A preventive measure has been put in place this year which revolves around a software change implemented by the US government. This measure aims to sieve out candidates who have been rejected more than once from reapplying the same year. 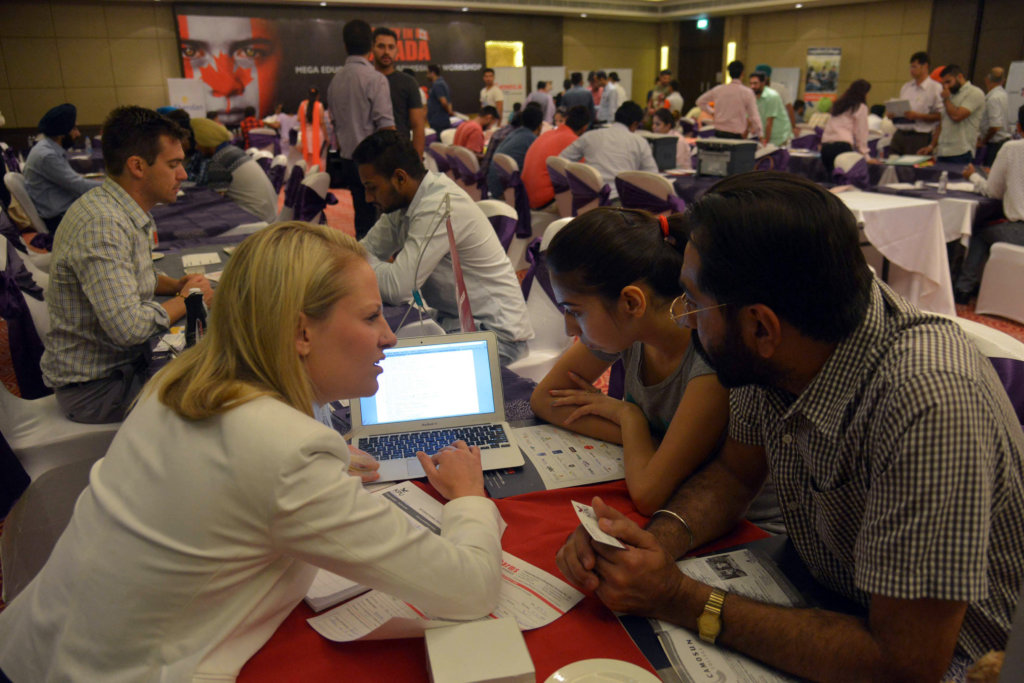 Better measures are being taken to help streamline visa processing measures for Indian students who have expressed an interest in studying in the US. Source: Narinder Nanu/AFP

Changes to the visa application system would also help streamline visa processing procedures and provide more interview slots for first-time applicants, who are high achieving students who have fulfilled their programme entrance requirements.

Student visa applicants are encouraged to regularly check the US Embassy of India’s website for possible visa interview dates. This would enable them to schedule their visa appointments once they have received their documents from their respective US universities.

Measures will be taken to block slots by non-student agents who don’t show up for the interview to give more availability for genuine applicants.

”Many Indian students who are in the US and want to travel to India to meet their families are using the visa waiver drop box scheme. Currently, there are slots available for this facility,” the minister-counselor said.

This scheme would also make it easier for parents of Indian students to visit their children. Parents who were issued a B-1 or B-2 visa that have expired in the last few years can try to grab a drop box appointment to renew their visas, Heflin was quoted saying.